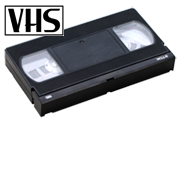 The Video Home System (better known by its abbreviation VHS) is a consumer-level analog recording videotape-based cassette standard developed by Victor Company of Japan (JVC). Several improved versions of VHS exist, most notably Super-VHS (S-VHS), an analog video standard with improved video bandwidth. S-VHS improved the horizontal luminance resolution to 400 lines (versus 250 for VHS/Beta and 500 for DVD). The audio-system (both linear and AFM) is the same. S-VHS made little impact on the home market, but gained dominance in the camcorder market due to its superior picture quality.