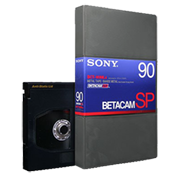 Betacam SP or "Beta SP" was the industry standard for most television stations from 1987 through the late 1990s. Despite the format's age it remained a common standard for video post-production into the 2000s.

Beta SP tapes cannot be used for recording in consumer Betamax VCRs like regular Betacam tapes, due to Betacam SP's metal tape causing the video heads in a Betamax deck to wear prematurely. Digitizing World has the high end VTR decks, specifically designed for Beta SP. We can transfer a single tape or an entire library of tapes.