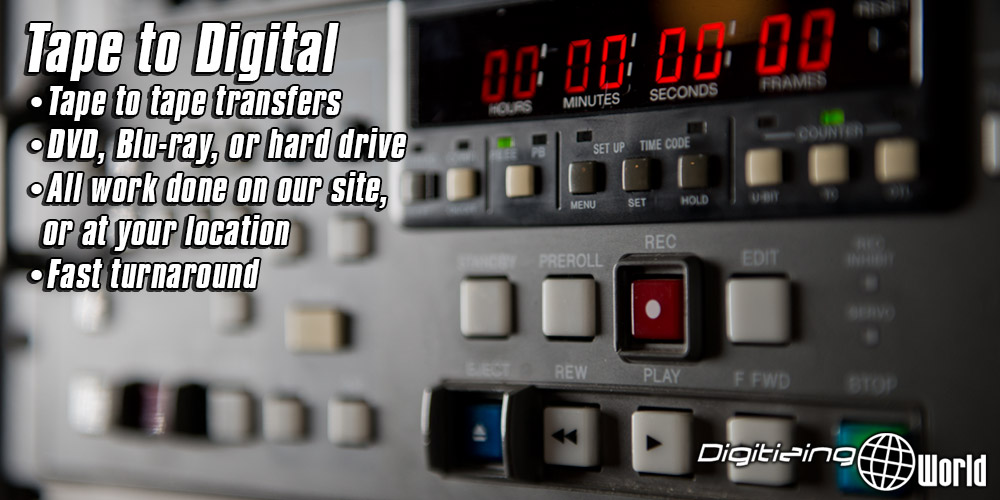 Digitizing... Anywhere in the World

Digitizing World began long, long ago as a former iteration, when one of the principals of the company was traveling the globe, shooting for BBC when former President Nixon was in the White House. Just about the same time as SONY introduced portable video equipment to the world, late 1960's to early 70's we operated a duplication and video transfer company called Dubs and Dupes. This was prior to the "Digital Age" and so we have been growing with and since the start of this industry.

Back in the days before video and digital media, our parent company, SuperGroup International, had been heavily involved in all sorts of film and television production using, yes you guessed it, film equipment. As video was introduced we added that to our repertoire and created a video division to support the industry.

Over the years we continued to advance. Our video capabilities multiplied at each and every turn. As new and improved equipment became available, we became experts on this new equipment and on the new formats, as they changed.

Back in 2008, the parent company created a duplication and standards conversion company called Dubs and Dupes which continues today. By acquiring each different type of digital equipment for every format and media type in our building, we were then ready to make the upgrade to Digitizing World.

As the world went digital we were right there with it. Thus our name, Digitizing World. Our customers are from all around the world. Some ship their media to us for editing, duplication, audio or video cleanup, etc. Some prefer to pass the information through secure links in the world wide web. Other clients we see on site. We are delighted to accommodate whatever works best for our customer.

Because we were always in the business of supplying numerous recorders to the television networks and the production community we had a substantial inventory which, in many cases, means more than 10 machines in each format.

Regarding the PAL format, some of our biggest clients have been the BBC, RAI, German ZDF, and the rest of the PAL 625 world. We have more functional PAL equipment than anyone in the USA.

Our in-house Miami facility often works with banks of ten transfer devices in each format. We are also quickly able to ship numerous recorders to an off site location for our On Location Digitizing Division.

For years we have had shipping agreements with many of the airlines. We are a known shipper so our equipment makes the transit from USA to anywhere in the world quite smoothly.

By working with an experienced crew we are able to offer the highest security and speed in digitizing large volumes (as in thousands) of videotapes. We also incorporate specialized database software to make the results of our processing millions of images both searchable and manageable to the novice.

Our team eagerly await the opportunity to be of service to you!