Return to All Categories | Audio Formats 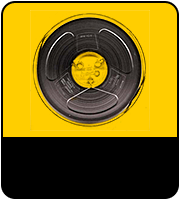 Reel-to-reel or open-reel audio tape recording is the form of magnetic tape audio recording in which the recording medium is held on a reel, rather than being securely contained within a cassette. Inexpensive reel-to-reel tape recorders were widely used for voice recording in the home and in schools before the Philips compact cassette, introduced in 1963, gradually took over. In spite of the larger tapes, less convenient use and generally higher cost media, reel-to-reel systems remained popular in audiophile settings into the 1980s.

Home | About Us | Services | Live Streaming | Site Map | Contact Us